Acute liver failure (ALF) is a life-threatening condition, and liver transplantation is the only therapeutic option. Although immune dysregulation is central to its pathogenesis, the precise mechanism remains unclear. Here, we show that the number of peripheral and hepatic plasmacytoid DCs (pDCs) decrease during acute liver injury in both humans and mice. Selective depletion of pDCs in Siglechdtr/+ mice exacerbated concanavalin A–induced acute liver injury. In contrast, adoptively transferred BM-derived pDCs preferentially accumulated in the inflamed liver and protected against liver injury. This protective effect was independent of TLR7 and TLR9 signaling, since a similar effect occurred following transfer of MyD88-deficient pDCs. Alternatively, we found an unexpected immunosuppressive role of pDCs in an IL-35–dependent manner. Both Il12a and Ebi3, heterodimeric components of IL-35, were highly expressed in transferred pDCs and CD4+CD25+ Tregs. However, the protective effect of pDC transfer was completely lost in mice depleted of Tregs by anti-CD25 antibody. Moreover, pDCs derived from IL-35–deficient mice had less of a protective effect both in vivo and in vitro even in the presence of Tregs. These results highlight a unique aspect of pDCs in association with Tregs, serving as a guide for immunotherapeutic options in ALF.

Reduction of pDCs in the PB and liver during ConA-induced inflammation in mice. 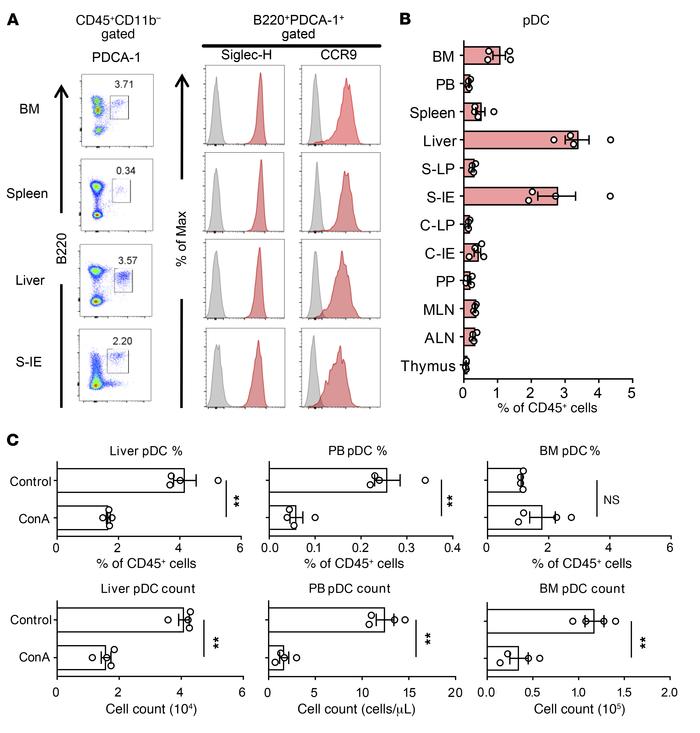